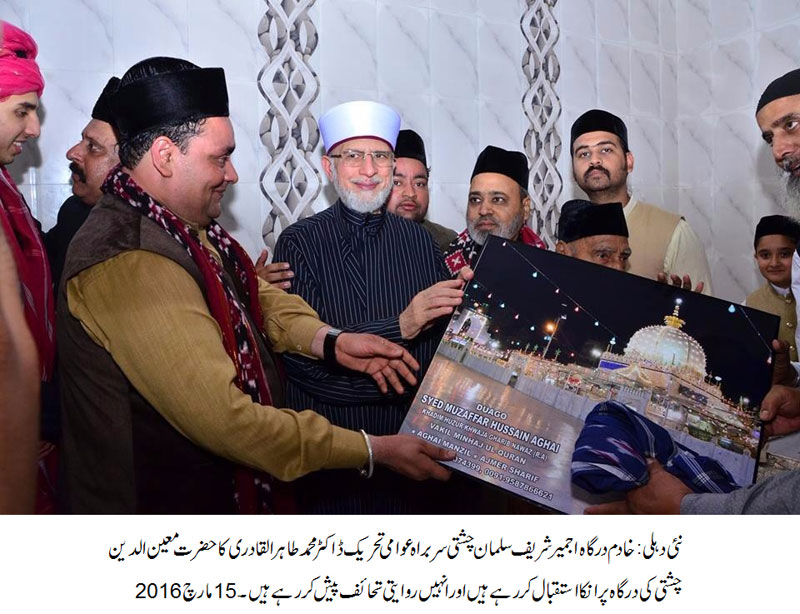 Shaykh-ul-Islam Dr Muhammad Tahir-ul-Qadri visited the shrine of Hazrat Moin-ud-Din
Chishti Ajmeri (R.A) in Ajmer Sharif yesterday and paid his respects there. Salman Chishti,
the Khadim of the shrine, warmly received Dr Tahir-ul-Qadri along with the hundreds
of pilgrims on his arrival. His ‘Dastar Bandi’ was done at the shrine and he was
given traditional gifts on the occasion. The people were hugely ecstatic to find
Dr Tahir-ul-Qadri among themselves. They chanted passionate slogans and eagerly
shook hands with him.

Speaking on the occasion, Dr Tahir-ul-Qadri said that Hazrat Khawaja Moin-ud-Din
Chishti (R.A) was instrumental in spreading Islam in the sub-continent in general
and Rajputana area in particular due to his spiritual blessings and religious services.
He said that the number of those converting to Islam due to his human friendly conduct
and love of humanity does not run into hundreds but hundreds of thousands. He said
that the life of Hazrat Moin-ud-Din Chishti was a practical manifestation of piety,
truthfulness, worship and cleanliness. He said that the revered saint neither had
any army nor any wealth nor other resources but in spite of that he ruled over the
hearts of millions of people.

Dr Tahir-ul-Qadri said that Khawaja Moin-ud-Din Chishti (R.A) is among the blessed
people of Allah whose shrine is a source of comfort to the people. He said that
those having devotion for him are spread over the whole world and it includes people
from every school of thought and religion. He said that only those people are blessed
and successful not only in this world but also in the hereafter, who dedicate their
lives to service of humanity and worship of Allah. He said that Hazrat Moin-ud-Din
Chishti (R.A) promoted love, peace and interfaith harmony all his life, adding that
he was a true paragon of service to the creations of Allah Almighty.

The PAT Chairman said that when one rises above one’s worldly interests, attractions
and parochial associations, one becomes beloved of Allah and His creation. He said
that there is a dire need of the fact that one enriches one’s life with the light
of teachings of Khawaja Moin-ud-Din Chishti (R.A) without emphasizing his miracles.
He also paid his respects at the shrine of Hazrat Khwaja Sayyid Muhammad Qutbuddin
Bakhtiyar Kaki (R.A) in New Delhi.