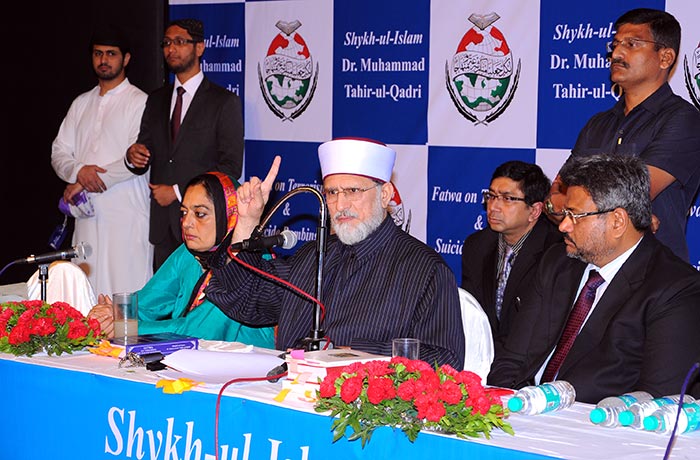 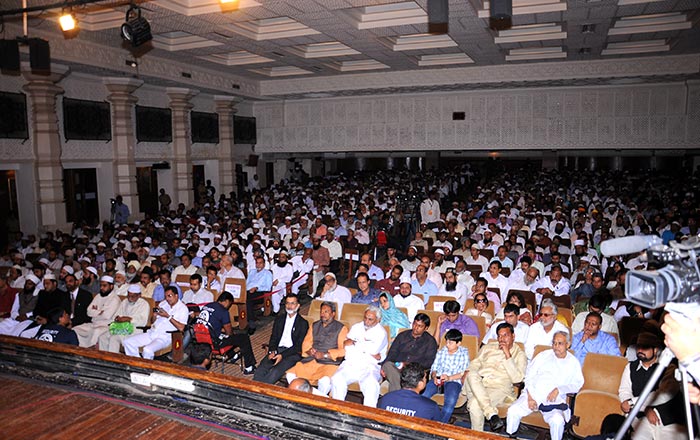 During the last leg of his historic tour of India, Shaykh-ul-Islam Dr Muhammad
Tahir-ul-Qadri addressed a big gathering at Burlama Toshri Sabha Girah, Mumbai,
on March 15, 2012. Present on the central stage were Rafique Ahmad Khan, President
of MQI Marhashtara and leaders of MQI Mumbai and MQI India. The proceedings of the
programme got underway with the recitation of the Holy Quran followed by Naat.

The participants observed silence in memory of those killed in Mumbai attacks
on 26/11 before the start of Shaykh-ul-Islam’s speech.

Shaykh-ul-Islam Dr Muhammad Tahir-ul-Qadri spoke on the subject of “Islam as
a religion of peace and human compassion”. The chief highlight of the speech was
his insistence on the fact that the world could not stay intact if it remains afflicted
with the scourge of hatred and violence.

Shaykh-ul-Islam said that the first revelation started with word ‘Iqra’ and Allah
Almighty imparted the lesson of democracy, human compassion, peace and love. He
said that had Allah Almighty willed, He would have started His Revelation with any
command regarding worship such as praying and fasting etc., rather He started the
Quranic revelation by commanding the believers to focus on knowledge and humanity.
These very teachings continue to be essential component of Islamic message, he held.

Shaykh-ul-Islam Dr Muhammad Tahir-ul-Qadri said that Allah Almighty sent the
Holy Prophet (SAW) in order to enlighten the world and purge it of darkness. The
Prophet (SAW) enjoined upon his followers to respect human beings irrespective of
any discrimination of caste, creed, colour or religion. He emphatically stated that
Islam does not allow any kind of war against humanity. 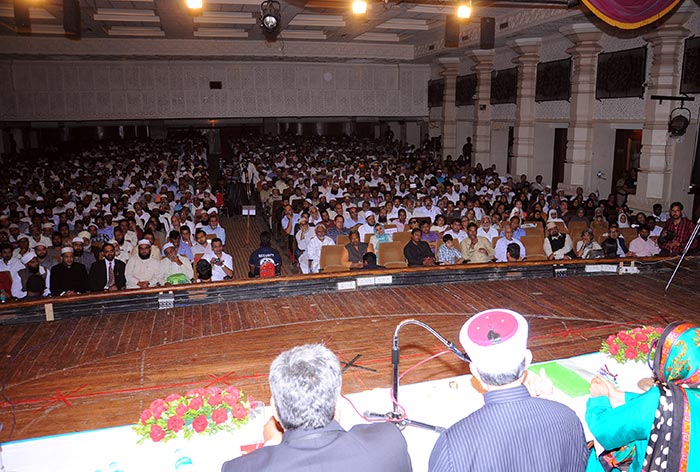 Shaykh-ul-Islam said that the Prophet of Islam (SAW) was a great advocate of
human rights who looked after the downtrodden sections of society and asked his
followers to be the best human beings in regard to their conduct with other fellow
human beings.

Shaykh-ul-Islam Dr Muhammad Tahir-ul-Qadri referred to an incident wherein a
delegation of ten companions came to the court of King Nijashi. The King asked them
as to who the Holy Prophet (SAW) was and what were the teachings of Islam.

Replying this question, Hazrat Jafar Bin Tayyar (RA) said, “We were illiterate
and uncivilized. The powerful would eat up the weak. We were neither under any kind
of law nor did we accept anyone’s sovereignty. The law we were beholden to was law
of power. We would kill our relatives and would not care a bit about our neighbours
or other human beings. Then Allah Almighty sent a Prophet (SAW) from amongst us.
We knew that the Prophet (SAW) is ‘Sadiq and Ameen’. We were fully acquainted with
his piety, cleanliness, sacredness and trust-worthiness. 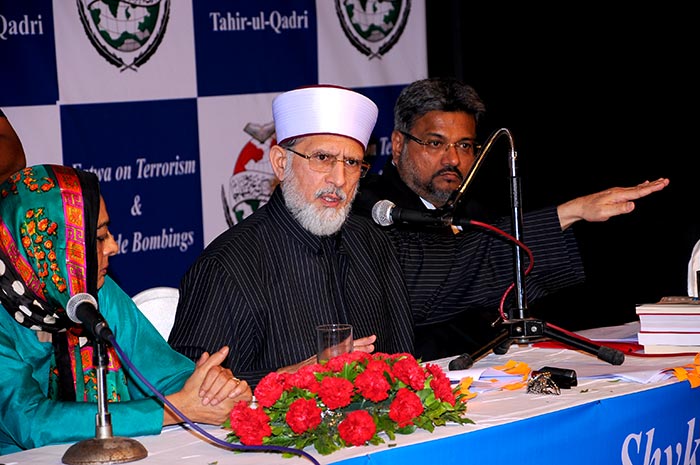 “The Prophet (SAW) asked us not to tell a lie, protect the weak, help the helpless,
the poor and the widowed and raise the orphan. He asked us to respect the women
and desist from bringing any allegation against them. He asked us to be trust worthy,
fulfill rights of blood relatives and neighbours. He warned against shedding blood.
He forbade us to commit immoral acts, deceive others and usurp the properties of
other people.”

Hearing this, King Najashi started weeping. He said that that is what he read
in the books about the Last Prophet (SAW).

Shaykh-ul-Islam Dr Muhammad Tahir-ul-Qadri said that love and human compassion
were being neglected from our core values. He said that the people called themselves
Muslims without realizing that Islam is all about human compassion, progress, freedom,
human rights and brotherhood.

Shaykh-ul-Islam Dr Muhammad Tahir-ul-Qadri said that he had come to India with
a message of peace and knowledge. He said that he was enemy of every terrorist and
militant. He urged the people that each one of people needed to move forward to
save human beings without caring much for the consequences. He said it categorically
that there was no importance of Tahir-ul-Qadri compared to the propagation of the
message of the Holy Prophet (SAW). He said that he travelled far and wide in the
world to spread the message of love, peace and interfaith harmony. He said that
he wanted the world to become hub of peace and defeat the forces of violence. 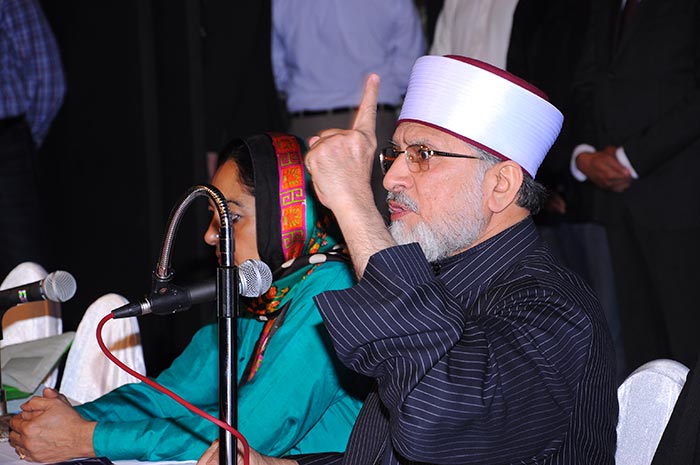 Mentioning allegiance that the Ambassadors going to Madina took, Shaykh-ul-Islam
Dr Muhammad Tahir-ul-Qadri said that “the first education that the Prophet of Allah
(SAW) sent to Madina was about humanity. He forbade them (Ambassadors) to commit
adultery, steal, kill children, bring false allegation against anyone, bite back
of people, and show disrespect to women. He asked them to be protector of rights
of people.” When the Prophet (SAW) himself migrated to Madina, he replaced its name
‘Yatrub’ with Madina (peace). In his first speech, the Holy Prophet (SaW) asked
his followers to love Allah Almighty, have soft hearts, love one another and fulfill
their promises.

He said that the Holy Prophet (SAW) never showed any hatred or displeasure towards
his enemies. He was rather paragon of patience and endurance. The Prophet (SAW)
left an exemplary character and an ideal life worthy of emulation.

Shaykh-ul-Islam further said that there was a need to spread happiness in the
world irrespective of any discrimination of religion or race. Mentioning Madina
Pact, and reconciliation among Quraish, Ansar and Jewish tribes, Dr Muhammad Tahir-ul-Qadri
said that the Holy Prophet (SAW) described the entire humanity as one nation. He
said that we had lost sight of this concept. There is no coercion in religion but
today some misguided elements were up to proving this in violation of the basic
teachings of the faith.

Dr Muhammad Tahir-ul-Qadri said that both Muslims and the Jews enjoyed their
personal and religious freedoms in the state of Madina founded by the Holy Prophet
(SAW) but in matters of politics, law and statecraft, they were equal citizens in
the eyes of the state. He said that that was how the Prophet of Islam (SAW) founded
a cosmopolitan and multi-faith society.

Shaykh-ul-Islam said that it was his message to the Muslims of Mumbai and the
countries with Muslim-dominated populations that the minorities of other faiths
were their responsibility in the light of teachings of Islam. They were, according
to Islamic injunctions, duty-bound to look after their protection and welfare. He
further said that the countries where the Muslims formed minority, it was their
responsibility to remain loyal to their countries. He said that Islam forbids them
to take up arms in any manner and advises them to integrate with the rest of society.
He said that it was the Sunna of the Holy Prophet (SAW).

Throwing light on the concept of amnesty, which was unveiled at the time of conquest
of Mecca, Dr Muhammad Tahir-ul-Qadri said that “Islam presented the concept of peace.
The character and ‘Sira’ of the Holy Prophet (SAW) was characterized by moderation.
He said that there was no space for extremism, hatred and militancy in Islam. Referring
to one Hadith, he asked the Muslims not to become extremists and if they remained
moderate, they would go to Paradise.

Mentioning the rights enjoyed by neighbours, non-Muslims, children and women,
Dr Muhammad Tahir-ul-Qadri said that “Islam neither allows waging of war against
humanity, nor does it allow mass killing, nor individual ones. It restrains its
followers from bringing any harm to women, children, worshippers, traders, prisoners
of war and non-combatants. It also disallows the felling fruit-bearing trees and
killing of even animals. Islam imparts a lesson of non-violence. The Prophet of
Islam (SAW) came to the world for protection of life, honour and property of humanity
not vice versa.”

Concluding his speech, Shaykh-ul-Islam said, “My message for the Muslims, Hindus,
Jews, Christians and followers of other faiths is that the world cannot stay intact
with attitude of violence and hatred. He said that the people at large would have
to employ open-mindedness by shunning extremism. It is alright to follow one’s own
religion but one must form a society based on love, and mutual respect. It is collective
duty to jointly extinguish the fire of terrorism and hatred and promote love and
peace. My message for the Muslims non-Muslims is that of love and human brotherhood.”

The programme ended with prayer for peace. 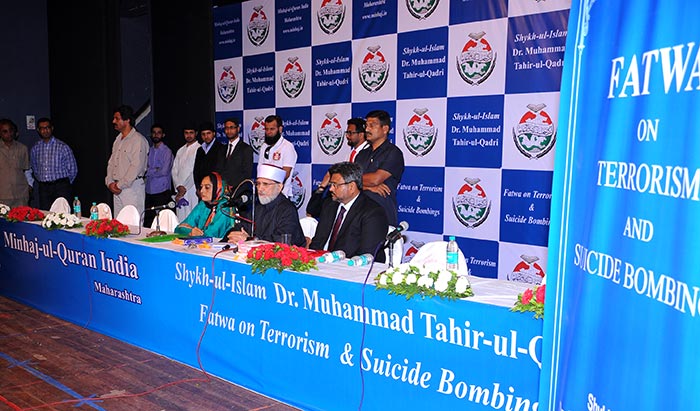 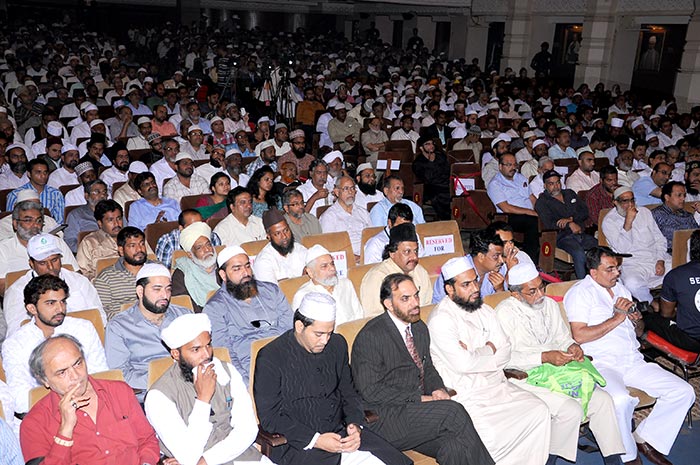 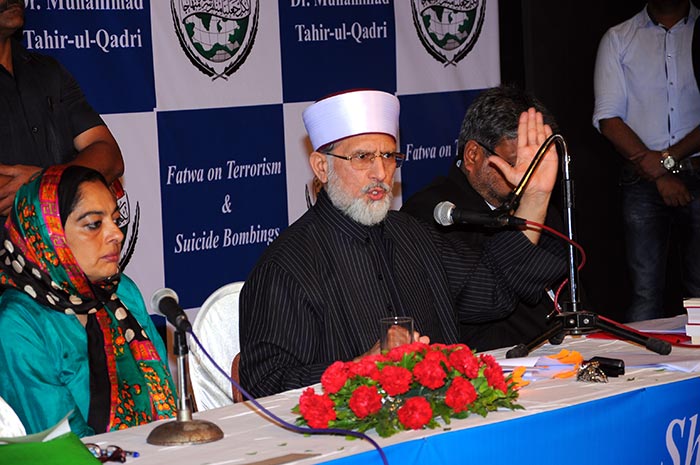 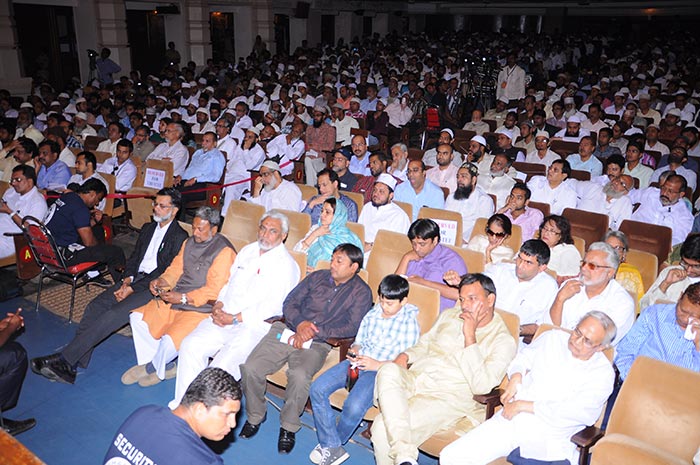 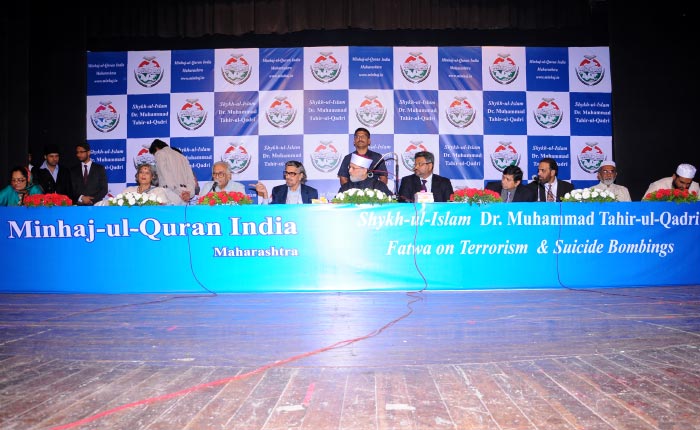 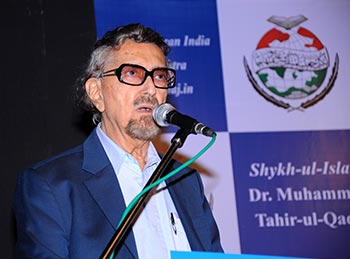 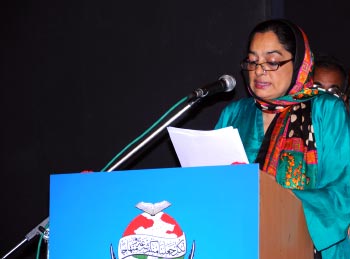 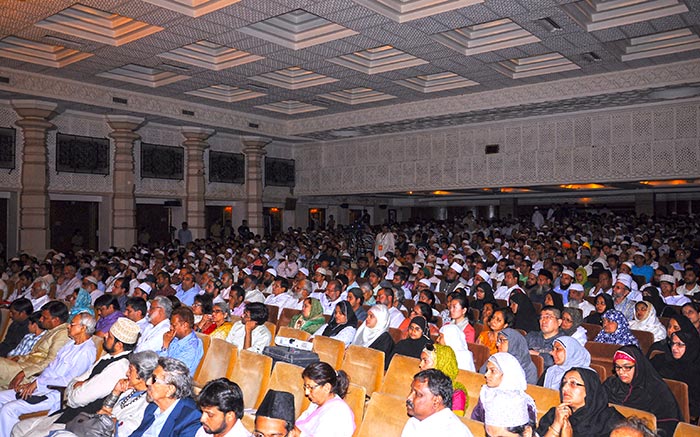 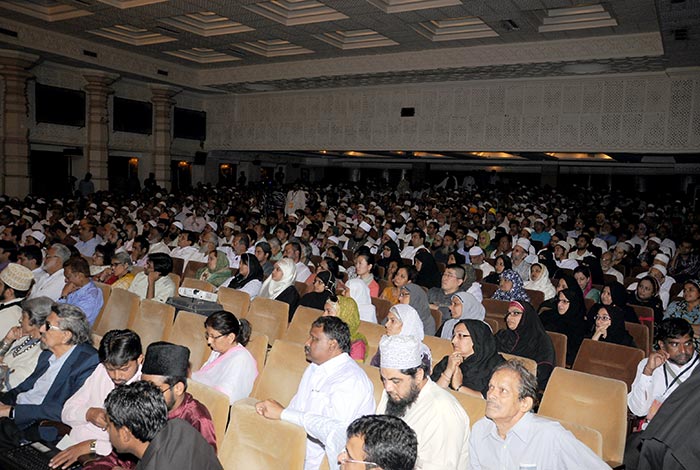