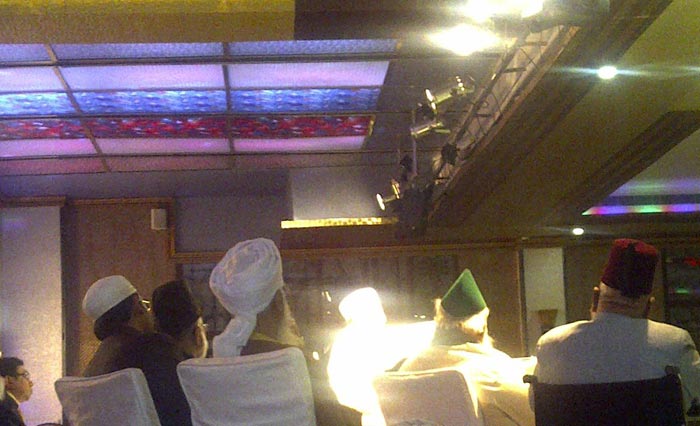 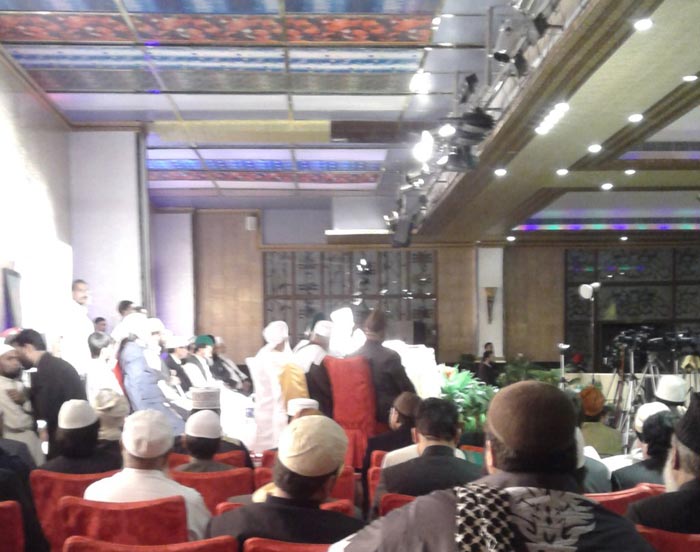 Speaking on the occasion, Maulana Sayyid Alam Mustafa Qadri al-Mausivi said that
Allah Almighty ordained the believers in the Holy Quran that those who remember
Him, He remembers those. He said that Dr Tahir-ul-Qadri chose the path of propagating
the message of Islam in the world and as a result he has become a leading authority
on Islam and renowned scholar of his times. He said that thought of Dr Tahir-ul-Qadri
has been blessed by the Holy Prophet (SAW). That explains why the hordes of people
feel attracted to him. He said that it was wrong to confine him to a particular
area and people as he was asset of the entire humanity. He said that it was time
we held him high esteem.

Continuing with his earlier lecture on Hadith he delivered on March 3, Shaykh-ul-Islam
Dr Muhammad Tahir-ul-Qadri continued to speak for four and half hours. He said that
all jurists are agreed that it was OK to accept the ‘weak Hadith’. He said that
acceptance of ‘weak hadith’ has been regarded as permissible and justified by the
Islamic law except for those of Hadith in the same category which deal with issues
such as infidelity (Kufr), faith, and what is allowed and what has been forbidden
etc. According to Islamic law, one could benefit from the ‘weak hadith’. He said
that no school of thought objected to this. He further pointed out that every Jurist
on Hadith has maintained that whatever is referred to by name of ‘weak Hadith’ is
not because of doubt on its text but because its chain of narration suffers from
some kind of weakness or flaw. He said that various commands of the Islamic law
emanate from most of ‘weak Hadith’. If one gave up ‘weak Hadith’, then one must
also abandon the Islamic injunctions described by them. 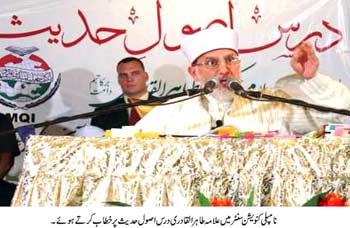 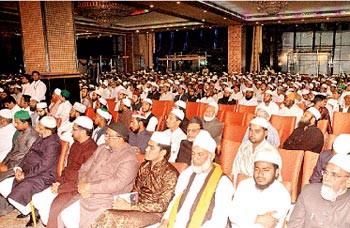 Shaykh-ul-Islam Dr Muhammad Tahir-ul-Qadri said that he had come to spread enlightenment
and light of knowledge and wanted to demolish the walls of ego-worship and misplaced
faith. He said that the Muslims suffered because of lack of real knowledge about
Islam and Islamic teachings when they surrendered themselves to fake religious scholars.
He said that those religious edicts, which tended to divide Muslims in various sects,
needed to be consigned to dustbin. He warned that efforts were afoot to confine
the Sunni school of thought into a sect. He categorically stated that no Brailvi
sect ever existed as Hazrat Ahmad Raza Khan Brelvi never referred to any sect by
name of Brelvi in any of his books. 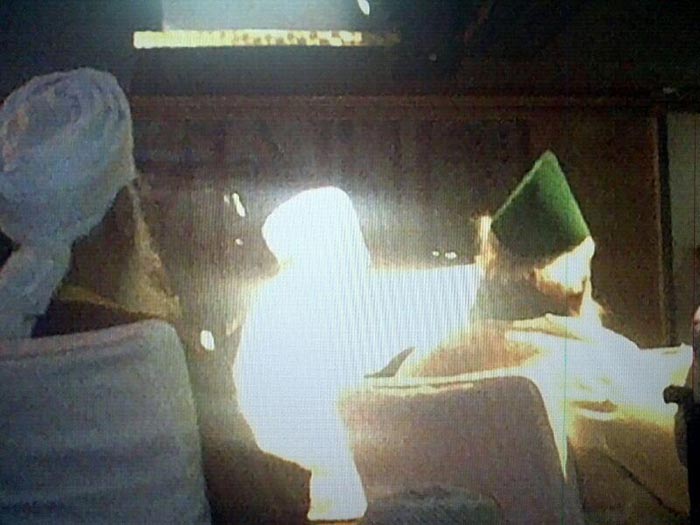 Shaykh-ul-Islam Dr Muhammad Tahir-ul-Qadri said that out of over 1.5 million
Hadith that Imam Bokhari (RA) collected, he remembered around 0.3 million Hadith
by heart. Out of three hundred thousand of Hadith, he regarded one lakh as ‘sahih’
(authentic), while he branded the remaining two hundred thousands of Hadith as a
kind of ‘weak Hadith’. Likewise, he collected only seven thousand Hadiths in his
book Sahih Bokhari. According to Imam Bokhari, he remembered three lakh Hadith by
heart, but he could not collect all of them into Sahih Bokhari.

Dr Muhammad Tahir-ul-Qadri also cited the example of Imam Ibne Salah who was
from among the founders of principles of Hadith. None of religious scholars belonging
to any school of thought ever objected to any of his book on Hadith, which are taught
in the educational institutions and universities of every school of thought. All
Hadith scholars are of the consensus view that one could benefit from the ‘weak
Hadith’. Shaykh-ul-Islam recounted hundreds of names of Hadith scholars in this
regard.

Referring to Hafiz Ibne Kathir, the student of Allama Ibne Tamaya, Shaykh-ul-Islam
Dr Muhammad Tahir-ul-Qadri said that Ibne Kathir has written that Imam Muslim (RA)
and Imam Bokhari (RA) included only selected Hadiths in their books due to space
constraint. He said that it was not merely the case with Bokhari or Muslim, rather
all the books of ‘Siha Sitta’ have not contained all of the Hadith. Imam Bokhari
has mentioned 40 thousand Hadith narrators in his book “Tareekh-ul-Kabeer” and out
of these, he regard 30 thousand narrators as authentic. Despite this, he included
less than two thousand Hadith narrators in Sahih Bokhari.

Dr Muhammad Tahir-ul-Qadri said that some people were trying to mislead the Muslims
by saying that the authentic Hadith were contained in Sahih Bokhari only. He said
that whatever was not mentioned in last 1200 years, the fake scholars of today were
churning out lies and half-truths. He said that there was a need to accept ‘Siha
sitta’ including Sahih Bokhari and Sahih Muslim as repository of authentic Hadith.

Shaykh-ul-Islam Dr Muhammad Tahir-ul-Qadri said that many commands and injunctions
of Islamic law derived their authenticity from ‘Weak Hadith’, therefore, collecting
these Hadith stands established from various books of Imam Bokhari (RA). For example,
to further explain his point, Shaykh-ul-Islam cited such matters as commands related
to periods of women, two Eid and permissibility of donations, which emanated from
the ‘weak Hadith’. He advised the religious scholars and Mashaykh to work hard on
matters related to faith, jurisprudence and Hadith etc. in order to be able to serve
the Muslims rightly. He said that it was important for the scholars to be acquainted
with all branches of knowledge to present correct message of Islam in the world.

Shaykh-ul-Islam Dr Muhammad Tahir-ul-Qadri said in his message that two-day lecture
on Hadith has made history in Hyderabad Deccan, which would benefit millions of
the Muslims and strengthen their faith. He said that all of their apprehensions
regarding Hadith would stand removed now after the lecture. He urged those who sought
to sow divisions among the Muslims and brand others as infidels through their misguided
religious edicts to give up their practices and tread on the right path. He said
that they should bind the entire world in a bond of love and peace.

On the conclusion of the second session, Shaykh-ul-Islam issued various ‘Asaaneed-e-Hadith’.
The programme ended on special dua.