Muslims have multidimensional relation with the Holy Prophet
(PBUH): Shaykh-ul-Islam

Four-day lecture on Hadith by Shaykh-ul-ul-Islam Dr Muhammad Tahir-ul-Qadri started
on Feb 29, 2012 under the aegis of Minhaj-ul-Quran International India in which
hundreds of religious scholars participated. This lecture was held in Quli Qutub
Shah Stadium in Hyderabad Deccan. Maulana Sayyid Muhammad Aulia Hussaini Qadri Pasha
presided over the programme, whereas Maulana Muhammad Khawaja Sharif was the guest
of honour on the occasion. 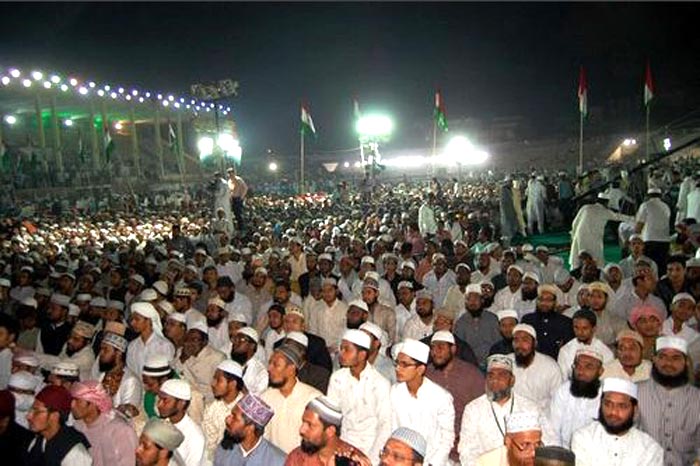 Maulana Habib Ahmad Hussaini, Nazim of Minhaj-ul-Quran Ulama Council India, presented
introduction of Shaykh-ul-Islam. He said that we were in the company of a personality
who had delivered six thousand lectures around the world on diverse subjects. He
said that Shaykh-ul-Islam had also authored hundreds of books out of which 440 had
been published. He said that he established MQI around the world to project the
universal message of peace, interfaith harmony and love, which are the core values
of Islam. He said that it was because of his services in multiple fields that he
was a known figure around the world and a leading authority on Islam.

Maulana Murtaza Shah issued the special Quaid number of monthly Minhaj-ul-Quran
published in February 2012 on the services of Shaykh-ul-Islam. Various articles
and write-ups pay tribute to the global services of Dr Muhammad Tahir-ul-Qadri.
Pictorial highlights of major events over the last three decades are also part of
the magazine. This grand session on Hadith took place under the supervision of Muhammad
Ghous and Deputy Floor Leader of Baldi party Hyaderabad. Sayyid Aal-e-Rasool Qadri,
Husnain Pasha, Ehtasham Qadri, Muhammad Touqeef, Mustafa Ali and leaders of MQI
India were also present on the stage.

The proceedings of the program got underway with the recitation of the Holy Quran
at 9 pm followed by Naat. Muhammad Khan Qadri and Arshad Habibi conducted the proceedings
of the programme. The programme was attended by hundreds of religious scholars.
Many people had to stand out of the venue to listen to the speech due to huge rush.
Huge digital screens were installed in order to facilitate the people standing outside
the main venue. 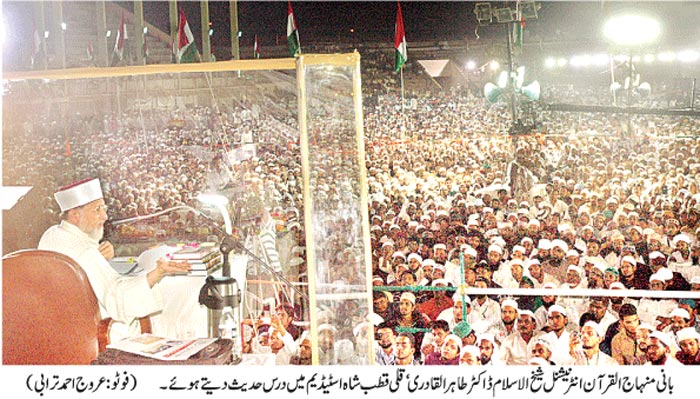 Speaking on the occasion, Shaykh-ul-Islam Dr Muhammad Tahir-ul-Qadri has said
that Allah Almighty has made the obedience of the Holy Prophet (PBUH) as obligatory
as His own obedience in absolute terms. He said that remembrance of the Prophet
(PBUH) cannot be separated from the remembrance of Allah Almighty and this is the
basis of ‘Iman’. He asked the Muslims to adopt the ‘Sunna’ of the Holy Prophet (PBUH)
in their lives.

Dr Muhammad Tahir-ul-Qadri expressed these views while addressing a huge gathering
of religious scholars in Qatub Shah Stadium in Hyderabad city of India. The stadium
continued to reverberate with the chants throughout the course of lecture. A large
number of people were standing outside the stadium to take part in this ‘Dora-e-Hadith”
and listen to the keynote speech of Dr Muhammad Tahir-ul-Qadri. 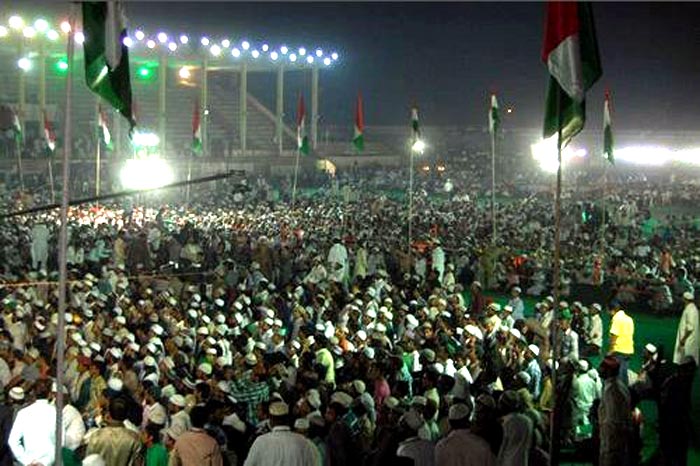 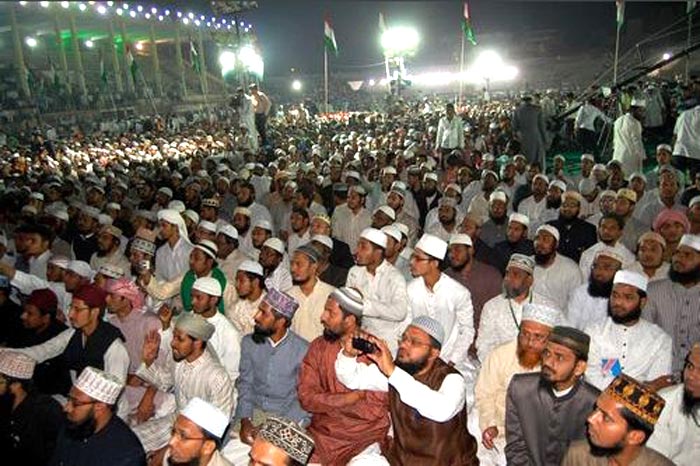 Shaykh-ul-Islam said that it is the demand of our relations with the Holy Prophet
(PBUH) that we keep sending greetings and salutations on him along with remembrance
of Allah Almighty.

Shaykh-ul-Islam Dr Muhammad Tahir-ul-Qadri selected ‘Siha Sitta’ for his lecture
on Hadith. Citing reference of various Hadith, he said that seeking help from the
Holy Prophet (SAW) has been the practice of the Prophets, Companions and the holy
men. He said that this faith was based on the Quranic text. He said that a belief,
which did not emanate either from the text of the Holy Quran or the Hadith, was
in fact mischief or innovation. He said that this belief has been present from the
early period of Islam and entire Muslim community and religious scholars were in
agreement on this belief. He cited the reference of Hadith no 1009 and 1010 of Sahih
Bokhari to prove his point.

Quoting various references from the Holy Quran and Hadith, Shaykh-ul-Islam Dr
Muhammad Tahir-ul-Qadri said that Adam sought forgiveness by invoking the mediation
of the Holy Prophet (SAW) and Allah Almighty granted his prayer. Likewise when the
Jews were being defeated in a war, they would put their finger on the name of the
Holy Prophet (SAW) in their sacred Book ‘Torah’ and their defeat would turn into
a victory.

Referring to Imam Ibn Battal, interpreter of Sahih Bukhari, he said that the
Holy Prophet (SAW) was five years old. Mecca suffered from the worst period of drought
at that time. People started dying because of shortage of water. At that point,
they beseeched their Master Abd al-Muttalib to pray for rain. He held the hand of
the Holy Prophet (SAW) and came to the courtyard of the holy Ka`ba. He then asked
his young grandson to pray for an end to drought. Hardly had the Holy Prophet (SAW)
raised his hands that the valley of Mecca started flood with rainwater.

He again referred to yet another Hadith contained in Sahih Bukhari and said that
once the people were worried because of lack of rain in Medina. Umar Farooq (RA),
the second Caliph of the believers, prayed for rain by invoking the means of the
Holy Prophet’s uncle `Abbas (RA), it started to rain right after the prayer.

Shaykh-ul-Islam Dr Muhammad Tahir-ul-Qadri said that the concept of intermediation
is not new. Rather this concept is the basis of faith. He said that the Prophets,
Companions and the holy men adhered to this creed and there was a need to propagate
it in the contemporary world. He said that Imam Bukhari was such a staunch and committed
holder of this belief that none of the interpretations of ‘Sahih Bukhari’ that have
been written to date, have negated this belief. Not even a single interpreter dubbed
this belief as an innovation nor did any one of them delete it from their books.
Referring to a Book on the Islamic law written 1200 years ago, Shaykh-ul-Islam said
that the book is characterized by this belief which is taught in the entire Islamic
world including Saudi Arabia.

Shaykh-ul-Islam Dr Muhammad Tahir-ul-Qadri said in his message that there was
a need to correct the belief today because in dosing so lay the success both in
this world and the world hereafter. The programme ended on Dua. Hafiz Muhammad Khan
Qadri and Arshad Habibi thanked the audience on this occasion.